Microsoft Studios' creative director has some choice words about always-online

SenjutsuSage said:
Umm people who read Gameinformer or participate in their polls are also in the minority. Hardcore gamers like us are the minority, no matter how much we would like to believe otherwise. How else do people think the Wii sold as much as it did? How else do some of the biggest releases for these platforms only manage something like 15 million at their peak, but usually around the 4-5 mill mark?

How else do people think Kinect rose the 360's sales so much? And the irony of this whole thing is that the PS4 is probably "always on," which is what makes this entire thing funnier. It just doesn't require an internet connection, but it's likely always on in the same way peoples cable or satellite receivers are, or the way Apple TV is, or in the way that I'm pretty certain the next xbox is as well.
Click to expand...

Im sorry I must of missed the news where the PS4 bricks itself from playing any games without a internet connection, care to share?.

I've been following this on and off, is billy really fired? or still rumors?
A

MrTroubleMaker said:
Ive been following this on and off, is billy fired?
Click to expand...

rumored to be, but neither confirmed or denied at this point
O

KidBeta said:
Im sorry I must of missed the news where the PS4 bricks itself from playing any games without a internet connection, care to share?.
Click to expand...

are we confusing "always on", "always online", and "online only" again?

Anton668 said:
rumored to be, but neither confirmed or denied at this point
Click to expand...

I thought some posters said we would all forget about the whole Online DRM over the weekend.

CliffyB said:
Didn't mean to. It's just that protecting your tweets after the fact is like trying to suck a fart back in your ass after you've already cropdusted the entire bar.
Click to expand...

Simile of the year.
U

OUT FOX EM said:
Bricking? What?
Click to expand...

Nothing is useable.
A

I'll add the one from Fandangox


Fandangox said:
I made an attempt.

and deposit mine here...

People are so pissed about this story. Everything and anything is being posted online. There is a gameinformer poll less than a thousand voted on and it's being talked about seriously in another thread.

You would think this guy was Cliffy B or something. He is some unknown Creative Director on an unknown game. Headlines read like he is Aaron Greenberg. LOL

Hopefully MS brings their A game looks like people are ready for them to give up their spot.

Had this pop up on my facebook feed tonight: 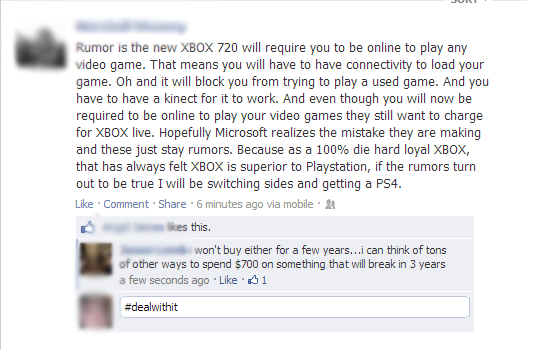 The backlash might turn out to be too much. Hopefully they back down on this if it's true.
G

was this posted yet?

Don't worry, I'll vouch for them.

What NeoGaf creates....comes back to NeoGaf.
D

many times over
U

It's symbolism for the circle of life.
W

Penny Arcade just posted a comic about it.

Uh.. what the dang is that?

"where is the rest" was both my first and my current reaction to this.

Can somebody gif the Back to the Future 2 "You're fired" scene with this guy and Ballmer's face?
R

That was even less funny than usual.
S

RedNumberFive said:
That was even less funny than usual.
Click to expand...

I thought that would be impossible, but you are right indeed.
D

Aah the glorious gaf circle of news and other stuff..
C

Surely they can come up with something better than that.
H

OUT FOX EM said:
The irony of all of this is, the backlash might be so great already that they could scrap the "always online" model before they even announce it. Perhaps this douche actually did Microsoft a huge favor.

People bitched about Windows 8 (and aren't buying it) and MS went full speed ahead.

MS has an agenda and they're not going to deviate from that because a vocal minority (we're a minority, regardless of what you thing) is bitching on-line about it.
B

I see the debate has now turned to "what exactly does always online mean", even though it's obvious what the answer is.
B

Ahhh. Taking 'phoning it in' to brave new frontiers I see.
E

linkboy said:
People bitched about Windows 8 (and aren't buying it) and MS went full speed ahead.

MS has an agenda and they're not going to deviate from that because a vocal minority (we're a minority, regardless of what you thing) is bitching on-line about it.
Click to expand...

Windows 8 sales show that the it isnt the minority that bitched. Same can happen to nextbox.
F

That would be pretty awesome if it actually was 'deal with it'.
F

Was this posted yet?

1st Course said:
Was this posted yet?

That is the most generic story ever. "New Xbox coming, it's going to be cool says MS employee!"
1

Deadly Cyclone said:
That is the most generic story ever. "New Xbox coming, it's going to be cool says MS employee!"
Click to expand...

Yeah but that not the important part:

Software Development Engineer - Lead
Microsoft - XBOX
May 2012  Present (1 year)Xbox Live - Video Cognition
Managing the Infrastructure and Systems team for the Video Cognition Xbox team
- Currently working on cool new features for the next Xbox!
- unable to share due to NDA

Very interesting if true.
I

You know, I really think this guy was very uncouth in the way he handled the situation, but I still don't understand this sick fascination people have with mocking people to the point of where they are some sort of internet-pariah.

In the end, even if the original person involved is in the wrong, everyone making these dumb jokes and childish memes kind of take the air out of anything, and makes everyone look like some part of internet shadenfraude gang looking for the next person to mock . Instead of focusing on the issue at hand, people are too fixated on trying to make the next "funny." It's just childish.

That's interesting indeed. What's the use case there ? Watch a movie on live TV or youtube, have the xbox recognize the scene and offer to buy/rent it ? Or just scan your divx collection and get official digital content from a video store ? (sort of like mp3 are handled now)
Of course it could also be used to control the content that can be streamed from a console (or another piece of hardware).

BruiserBear said:
I see the debate has now turned to "what exactly does always online mean", even though it's obvious what the answer is.
Click to expand...

If it is always online, Microsoft is not going to call it "online DRM", they're going to SimCity it. The difference is that some people will decide to believe them.
H

MCV has learnt that Microsoft has been telling partners that the Next Xbox will NOT include a disc drive.

The briefings have been issued under what MCVs source describes as the strictest NDA they have ever encountered.

Although the console will not include a disc drive, it will offer compatibility with some sort of interchangeable solid-state card storage, although it is not known whether this will be proprietary or a more standard format such as SD.

Furthermore, a 2013 launch date for the hardware has been confirmed. What is less clear, however, is the intended timing of Microsofts announcement.
Click to expand...

:lol if this is true than sorry... dont want to download every game with my 1mbit xD

And why Gamestop said the xbox would be good? A console like this would be the end for gamestop oO
D

No disk drive is pushing it to crazy land.

Sounds like an exceptionally strict NDA to me.
P

They need to define "next xbox"...

Radec said:
No disk drive is pushing it to crazy land.

You don't buy that Microsoft can and will make exceptionally stupid decisions?
I

These rumors are so silly. I don't understand how people haven't realized that these sites are doing this shit for hits most of the time.

"strictest NDA ever", but they're still leaking info on release date and hardware... weird.
Anyway at least it confirms the older info about MS being very, very focused on avoiding leaks. I hope the surprise will be worth it in the end.
You must log in or register to reply here.
Share:
Facebook Twitter Reddit Email Share Link
Top Bottom