SpeedOfNuts said:
On the COTA MotoGP race, it seemed clear Marquez was just comfortable behind Dani and didn't want to do any mistakes, specially after Mav crashed. His tyre choice was also H H to Pedrosa's M H if I recall correctly. Rossi needs a massive improvement now in Europe or the title seems a Marquez Viñales thing, but it's still nice to see him on top of the standings. Zarco has to be the highlight of the beginning of the season though.
Click to expand...

It can be rather hard to write about the events post race without giving a lot away! Very happy for Marc (much needed for the championship) but I'm also very happy for Zarco as the jump from Moto2 to MotoGP is very hard for most riders. Hopefully Viñales learns from his early exit. Rossi just keeps on doing the job on the other factory Yamaha which seems to pay dividends by the end of the season.

The penalty Rossi got was laughable; Race Direction are always making me scratch my head as the penatly did SFA to the end result.

In regards to Pedrosa and Marquez, I read Marc prefers the hard front tyre because of its sidewalls being stiffer; Rossi and Marquez seem to dislike the new front tyre construction although the factory Yamaha riders don't seem to be suffering too much. Marquez needs the Honda to improve greatly IMO as his mastery of COTA seems to mask a few issues with the Honda.
S

Well Rossi gained some time advantage, maybe he should have dropped back a little in relation to the Honda but I agree it was harsh.

About Honda I can see how the Yamaha may be better overall but I think Honda is by no means far away and in some circuits it's better. Pedrosa underperforming for years makes it look worst that it actually is and I think Crutchlow's performance proves it.
T

SpeedOfNuts said:
Well Rossi gained some time advantage, maybe he should have dropped back a little in relation to the Honda but I agree it was harsh.
Click to expand...

Race Direction have been laughably soft for years and all of a sudden they are making idiotic decisions like a 0.3 second penalty


SpeedOfNuts said:
About Honda I can see how the Yamaha may be better overall but I think Honda is by no means far away and in some circuits it's better. Pedrosa underperforming for years makes it look worst that it actually is and I think Crutchlow's performance proves it.
Click to expand...

Matt Oxley seems to think the tyres and Honda's development direction needs to be addressed:

the RC213V was originally conceived to take advantage of Bridgestones ultra-high-performing slick during braking and corner entry. The bike still retains its original character and therefore needs a stiff-construction front
Click to expand...

You can read the article here: http://www.motorsportmagazine.com/opinion/motogp/hondas-failed-great-escape
B

Dale Earnhardt Jr. just announced his retirement at the end of this season.
C

Good on Jr for getting out while he's still somewhat healthy.

Probably shouldn't have come back at all after the latest concussion, but whatever.
P

Argentina Super Stage starting soon on Red Bull TV. Should be a good one. 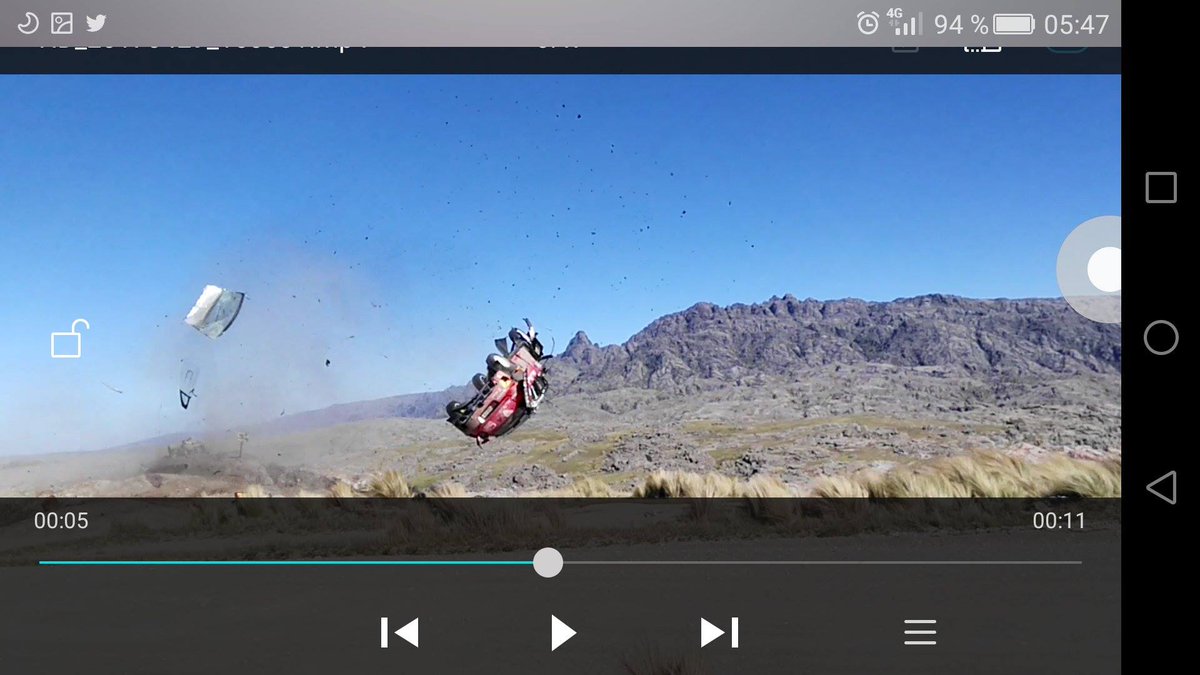 This WRC season is the best one in ages.

One stage to go and only 0.6s between Evans and Neuville for the win.
R

0.7 difference in the end, what a drive from both.
P

WTF is up with Argentina those past 2 seasons? The win came down to the power stage yet again.

Robaperas said:
0.7 difference in the end, what a drive from both.
Click to expand...

Can't help to feel a bit for Evans. Good for Neuville though, now imagine he didn't throw away two certain wins in Montecarlo and Sweden.
T

How to finish second in style: https://streamable.com/ycpxl
R

SpeedOfNuts said:
Can't help to feel a bit for Evans. Good for Neuville though, now imagine he didn't throw away two certain wins in Montecarlo and Sweden.
Click to expand...

Well, Evans did loss a bit of time on that last stage when entering that tight bridge, but yes, after leading all the weekend, losing like that is heartbreaking. As for Neuville, I prefer a more close battle at the top, after so many years of 1 driver/team dominance, it's good to see 3 drivers fighting for the championship lead.
S

The North West 200 is taking place this week. You can watch it on the BBC: http://www.bbc.com/sport/live/northern-ireland/39507779

Some images from Michael Dunlop: 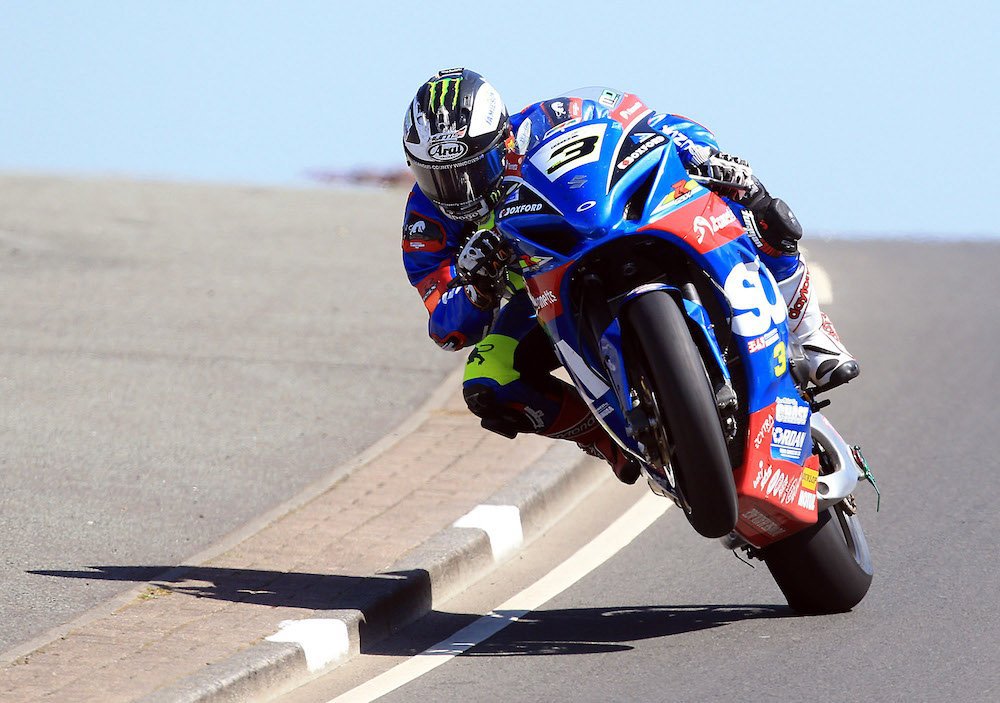 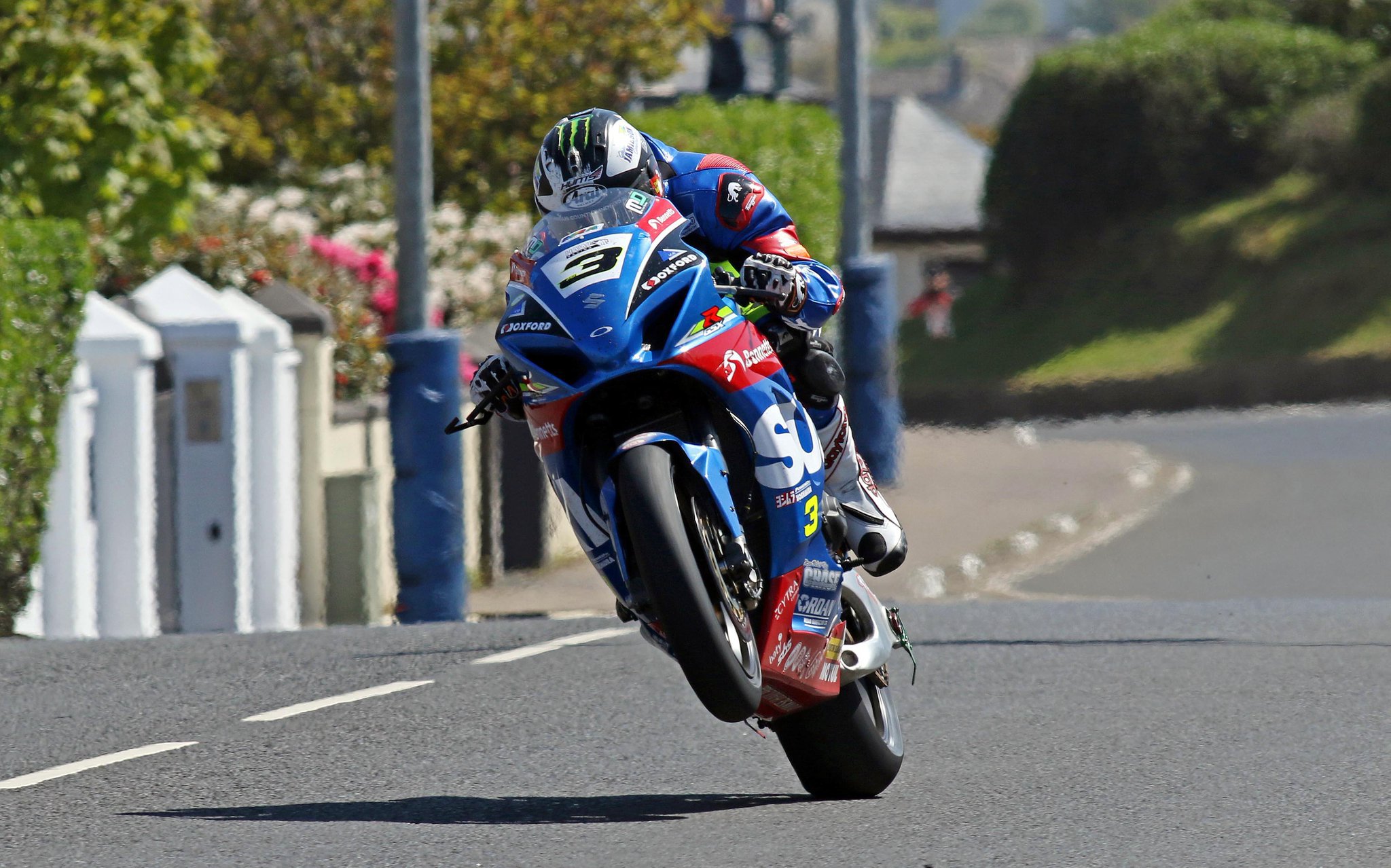 Just had a pretty nasty wreck in the Cup race at Kansas. It looks like they're cutting the roof off of Almirola's car to get him out. 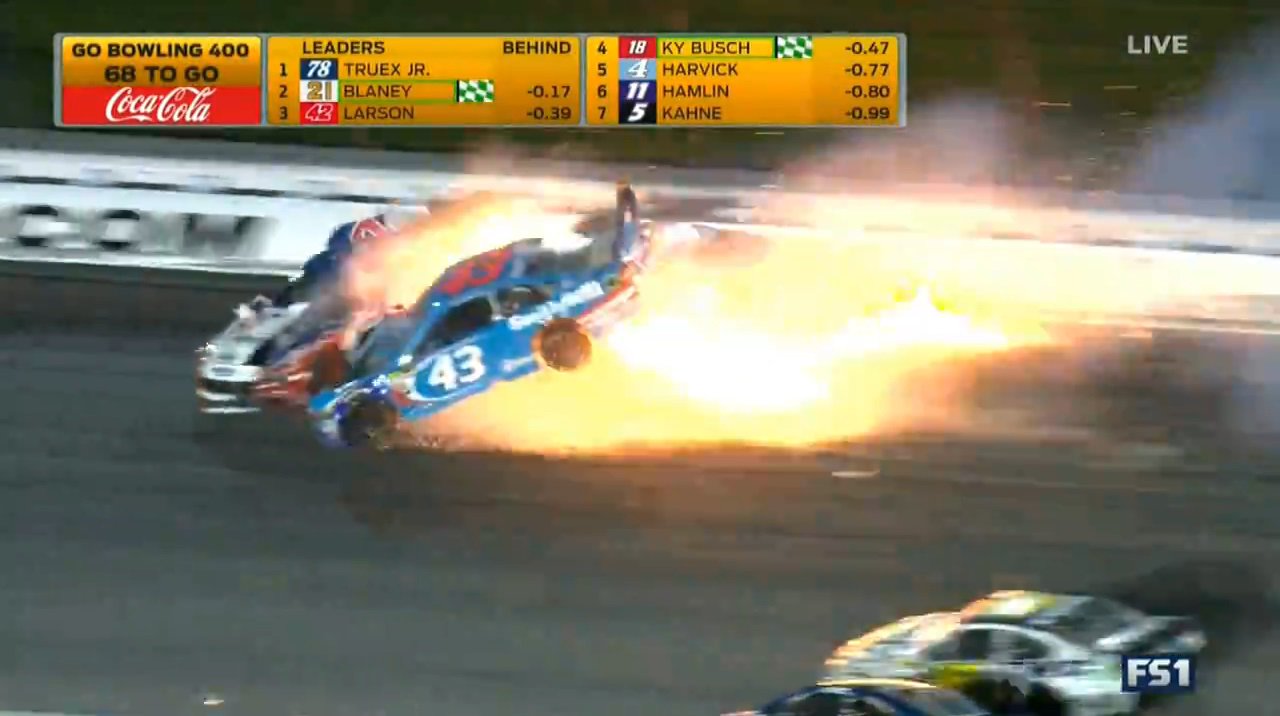 Danica is in that wreck inside the fireball.

Edit: They've got him out of the car, on a stretcher, and in an ambulance.
L

Just watched it happen. Danica looked none too pleased to be in that mess.
C

Leunam said:
Just watched it happen. Danica looked none too pleased to be in that mess.
Click to expand...

She was running so well tonight to get involved in something like this.

Hoping Aric is ok, thinking the backboard was preventative, but it might have been an injury.
D

Pretty bad wreck, wonder what Almirola was doing way up there.


Also when will Chase Elliott's luck turn? Come on man.
B

Almirola has a compression fracture of the T5 vertebrae. He'll be out for a while.
T

don't ask me for codes

Damn. Riding on those roads is so dangerous.
C

Awful news, hope he pulls through this ok.
T

Nicky always comes across as a really good guy and I would hate to see anyone lose their life through any accident. I hope Nicky fully recovers as the pictures were awful.

Not Nicky... Easily the nicest, most humble and down to earth racer I've ever watched. Not like this...
B

Come on, Nick. Pull through.
D

I'm not a big bike fan but definitely hoping Nicky pulls through!

He seemed like a good guy in the documentary Faster(?) It was narrated by Ewan McGregor.
T

don't ask me for codes

Every time I see this thread bumped I take a deep breath, click and just hope for the best. Come on Nicky.

Keeping fingers crossed that he'll pull through. You can risk your life everyday and then lose everything in an accident somewhere else. Recently our most famous Polish speedway rider Tomasz Gollob had a freak accident on an enduro bike and it's likely that he'll never walk again.

The young man, who is still in the intensive care unit of Cesenas Bufalini hospital, has suffered a serious polytrauma with subsequent serious cerebral damage.

Hope he pulls though, he's such a good guy :/
T

The family HAS NOT issued a statement that Nicky is dead.

Nicky IS NOT dead, although he is on life support.

Nicky was riding his bicycle alone, NOT in a group of 14 riders.

Doctors DID NOT perform surgery on Nicky.

Nicky WAS NEVER in an induced coma.
Click to expand...

I sincerely wish it was better news 8(

Here's a link to the english stream of the DTM race that currently happening. There's less then 40 minutes left in it.
R

Such a spectacular event.

The best commentary in the history of motorsport:

I was laughing my ass off watching this live.
D

My God, this guy is slow, hahahaha!
D

Thats what you call a proud commentator who knows he fucked up but refuses to acknowledge himself as doing so and keeps on going.
S

Holy shit lmao. It took me a second to get what was going on, but then I noticed marshals clapping and thought "This guy is commentating the fucking victory lap and doesn't realise the race has ended."
M

If anyone wasn't already aware, NISMO.TV is doing live coverage of Super GT this year complete with English commentary on Youtube. Round 3 just finished up and without spoiling anything, I'd have to say it was one of the most exciting races I've watched in my whole life.

Edit: I probably should add that the commentary isn't the most "professional" thing out there but it does the job, especially if you don't mind a bit of humour.
B

Apparently Jorge Lorenzo and Jack Miller had a bit of a set to in the riders meeting on Friday where Jorge was one of the few riders to defend the 2017 Michelin fronts while everyone else voted to go back to the 2016. Miller said, "Opinions are like arseholes, everyone has one." So Jorge suggested Miller's crash was a message from God! 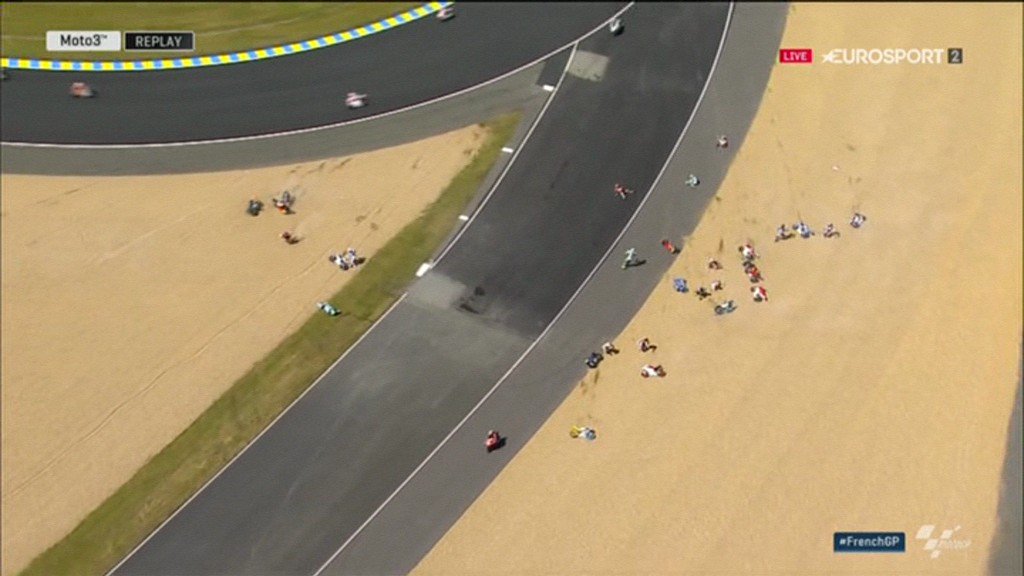 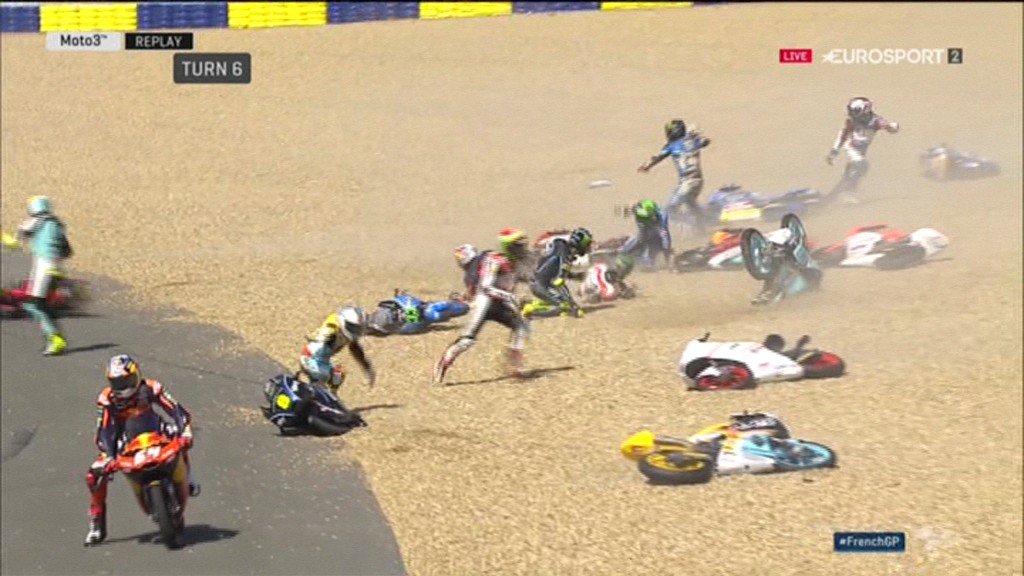 Oil on the track?

Wow, a couple of the riders were very lucky there. The bike just cleared them.

That looked horrible on the slomos. They were super lucky to avoid serious injuries.
B

What a fantastic race
J