Which new entry into the industry are you interested in the most? Google's "Stadia" or Apples "Apple Arcade"?

We have had two very bad interesting conferences which brought companies Google and Apple on stage to show us their first ever "serious" entries into the gaming market with Apple Arcade and Stadia.

Here's an overview for each:

1. Claims that you can use old phones/laptops and can run 1080p 60fps games on them through streaming even though they have outdated hardware.
2. No pesky physical box under your TV they say.
3. Created their first, First-party studio live on stage.
4. Switch screens or jump into play in 5 seconds or less.
5. You can click on a youtube button while watching a guy play a game and then play that game in 5 seconds or less.
6. No game download, no off-line play for that is OLD SKOOL and not the new way of doing things. You can no game download in 5 seconds or less.
7. Supports everything from Iphones, Tv's, Laptops, and game consoles (which contradicts not having a pesky box under the TV), you can even play from Chrome browser.
8. No details about infrastructure were stated, but they claim if you can watch a YouTube video, you can use Stadia......In 5 seconds or less.
9. No details on prices, but they say it will be common sense and price conscious and they will adapt comprehensively to reform the price if needed.
10. Stadia will have a controller unique to itself at launch. Features of the controller not fully explained yet.

Stadia launches this year at sometime period, between now and dec 31st., more games will be shown in June supposedly.

1. Apple will allow you to pay a subscription to play all your favorite IOS games for a low price. Not only on your IOS devices, but your MAC as well because...
2. Some IOS games are in "packs" which have games pre-selected. Devs split the profits in these packs.
3. No price or any other in-depth details were given, in 5 secon-
4. Free games, or games with in-app purchases are not included.
5. Never before have you seen game developers make games before in your life. Because only at Apple this is possible (not joking watch the clip, they lost their minds)
6. You can earn 3% back in cash for every 5 games you buy on Apple Arcade if you use Apples new Credit card.
7. All Apple Arcade games are ONLY on IOS.
8. Launches this fall at somepoint between the start of fall and the end of fall.

No price given, no additional details, however Apple says that they will roll-out comprehensive breakdowns for the less informed individuals, and casually explain their vision to reach more voices to diversify their diversity.


With these two juggernauts entering the industry with full-scale options filled with information and content, and really setting the world on fire causing the heat to coll and turn to ice freezing you to death I've a question for yoU!

Which between Stadia and Apple Arcade are you the most interested in? 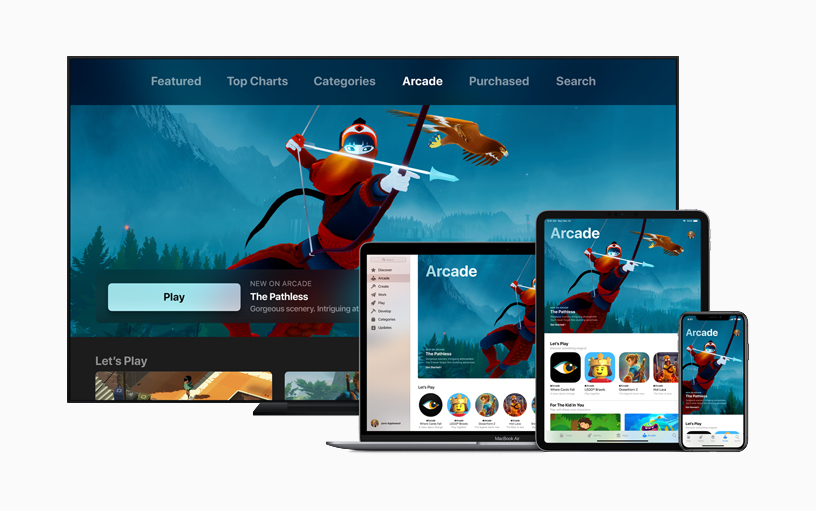 I think you are comparing apples and oranges with this thread.

None. Both suck ass and just makes me wanna stop play games.

Apple Arcade's subscription comes with an inflatable friend so you can enjoy co-op games and one year of free starbucks drinks. lol

neither. why should i pay to stream a game with poor image quality and lag when i can just own the game outright? why would i want to force always-online connections onto all of my games, which are mostly single player? has Google ever made a game themselves? i've yet to see a single game from the company.

i've played a handful of iOS games but mobile gaming doesn't interest me since i have a Switch, i do my portable gaming on the handheld device. outside of 2 or 3 phone games i have never gamed on an Apple device and have been using them for 20+ years now.
Last edited: Mar 26, 2019

The fuck is Apple Arcade?

Stadia I guess. At least it seems to offer something somewhat new and interesting.
I don't even own Apple devices and generally would rather pay for unlimited access to the games I want rather than a monthly fee for pre selected games (which kinda applies to Stadia too I guess but at least streaming offers something I don't have already)

zenspider said:
The fuck is Apple Arcade?
Click to expand...

It's like a gamepass for mobile where you can pay an unspecified fee to play a bunch of mobile games which seem to be mostly small or indie tier stuff not unlike the hundreds of games like this available on PC and consoles this new and innovative type of "non mainstream" games that totally couldn't exist without Apple
Last edited: Mar 26, 2019

Project Xcloud isn't on the list so I chose Drive-by.

Stadia is smoke and mirrors as much as crackdown 3 was until I see an actual 1st party game from them....Those tech deos looked like ass in a box...and 4K 60fps streaming or 8K? Come on google...

Even if you get 4K streaming at 60fps there is no way there won't be artifacting and banding every time there is a slight drop in bandwidth or signal.


Apples service is a trashy attempt at keeping up with the Jones's. I also can't even imagine the amount of in app ADs that will be attached to it. IOS games are terrible across the board for intrusive ADs.

Instead of your 1-time payment of $0.99 for an iPhone game, now you can pay X dollars per month to rent it and many other games you don't care about.

Does this mean that I won't be inundated with 30 second video ads every 15 seconds of gameplay anymore? What happened to the 1 time payment model, now every god damn phone app wants $5 per month or a 1 time buy out of $500 for "lifetime" access, which just gives you that version until the new one comes out and you are asked to shell out again.

What is the big deal about game streaming when PS NOW is all ready available and working well and raking in a massive amount of money for Sony. Everyone is acting like it's some big new thing when PS NOW has been out for quite some time(not everywhere to be fair). And might I also add that it's the highest earning game subscription service out there as well.
Last edited: Mar 26, 2019

zenspider said:
The fuck is Apple Arcade?
Click to expand...

Thread was made on it, you can even watch the conference in replay if you want.......Don't do it.

Just read the summary in the thread.

'member when OnLive tried this bullshit a decade ago and failed miserably? I 'member.

Even with gigabit internet there's lag and artifacts, no gamer wants either of those things. Also most people still don't have gigabit internet connections and they might have to share the bandwidth they do have with other family members who want to watch Netflix or download something. Just one buffering screen will be enough to turn gamers off completely.

I predict failure, at least for now, maybe it could have a chance if Google wants to invest trillions to build a global gigabit (and beyond) internet infrastructure.

Last Prime said:
I think you are comparing apples and oranges with this thread.
Click to expand...

Well, you're half right.

So is the "drive by shooting" option allegory for the division of digital storefronts?

between the 2, Stadia. I have a less than zero interest in mobile games.

Apple is an interesting competitor. new to the gaming world.
S

Apple Arcade if I had to actually choose between the two. It would provide a truly lag free experience.

Neither will give me what Im looking for: quality games

I couldn't careless about both of them. But if I had to choose, I guess Google Stadia because I will never buy an Apple Product again.
D

I'm assuming the drive-by shooting is equal to "I don't care about any either".

What's the hell going on with all these new platforms and stores?

I feel like I'm in the 90s with 3D0. A hundred manufacturers are making versions of the same thing in a market that has always gravitated towards having one winner.


Afro Republican said:
Thread was made on it, you can even watch the conference in replay if you want.......Don't do it.

Just read the summary in the thread.
Click to expand...

It's actually the far more interesting thing to me... ugh.

I've been LTTP on some fantastic mobile games - Sworcery, Downwell, Threes, Ridiculous Fishing, etc., or missing out on Monument Valley for example -just by not being a phone person. I get the cheapest Android from Boost whenever I'm fed up managing internal memory.

There is a cream of the crop in paid mobile that can catch my attention, and I'll be mighty pissed if those things are happening behind a hardware and sub paywall. ...but I'm interested.

I'm eyeing Stradia too. It seems the cheapest route to multiplatform AAA which interests me about as rarely as as would justify the occasional monthly re-up and sub-optimal experience.

There are so many companies trying to do this streaming crap, if Sony can just keep all the titles coming to PlayStation , they will be the only place to play nearly everything and with the best quality and biggest multiplayer community . Then the others will gradually fall away from lack of interest.

Drive-by you say? Prepared I am

Have zero interest in either of these ideas. Will just go back and play my older systems.
S